This was a fun run! Lauren and I went out to West Ashley Park and made five miles out of a few loops around a neighborhood and West Ashley High School. (Living out here has made me very appreciative of school parking lots. Always big. Always empty. Usually very safe. Not a bad spot for a run when in a pinch.) 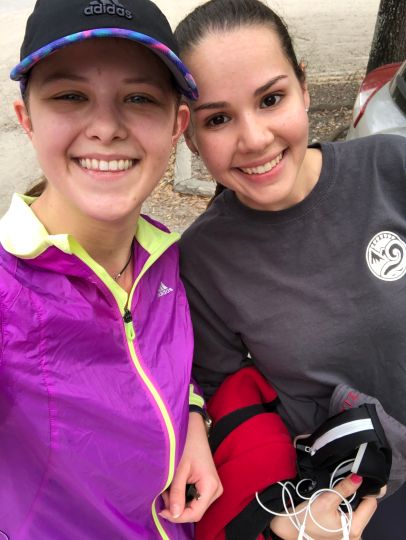 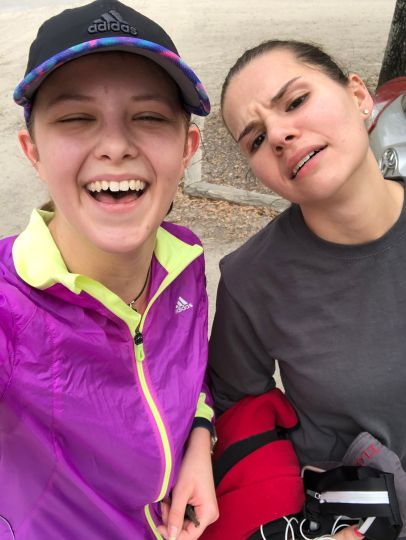 Fun though it was to run together, this was a pretty gross morning. Cold and wet (hence, my rain jacket and her sweater on her arm). Thankfully we didn’t really get rained on, but it was definitely chilly. I’m not wearing it in these pictures (because we almost forgot to take them) but I wore my head wrap over my hat/ears the whole time, which helped some.

Neither of us had ever run in this area before, and once we started to near mile three things became a guessing game. We were running in one of those cookie-cutter subdivisions, where everything looks the exact same and all of the roads are named after a flower or a dead white guy. When we realized we needed to start thinking about turning around, we also realized we have no idea where we really were. We had to pause a couple times and pull up Google maps, which was actually not all that helpful in terms of figuring out which way was the way back to our cars. Eventually we found a familiar spilled Cherry Limeade from Sonic (and when I say spilled, I mean clearly having been tossed out of a car window. Generally I am very opposed to littering, but this may have been the one time someone’s litter came in handy) that we’d passed on our way in and figured out how to get back.

Despite the weather and the getting lost, though, this was a good run. My average pace was the exact same as my previous, so I like that consistency. I got my third-best 5k effort (30:14), and my fastest split was 9:25 for the last mile. So, you can see I felt pretty good. This was the furthest I’ve run post-marathon, and I was a little sore from the prior day’s run and yoga session, and a little nervous in general (a somewhat regular feeling that I talked about in a previous run log), but I’ve been tracking consistently faster and feeling more and more confident with each run so I tried to translate most of that anxiousness into excitement. I feel good about how my stats but more importantly had fun on this run.

Afterward I got in my car and drove to Mt. Pleasant to meet Hannah for  a “rejuvenation” yoga class (using ClassPass, as I mentioned in my last run log), which turned out to be the perfect follow up to a long run. It was a “hot” yoga session, so the room was heated to around ninety degrees, which I loved having been so cold and wet outside on my run (I also just in general love to be hot). We did some beginner-level stretching and primarily spent the hour foam rolling, which hurt so good. It was exactly what I needed. I’m probably going to use another ClassPass this week, but haven’t decided what class(es) I’d like to go to yet.

I have, however, planned out my runs for this upcoming week.

So, very similar to what I did last week. Actually, it’s what I planned for last week, but instead it ended up looking like:

Even though I didn’t stick exactly to my plan, I still stuck to my goal, finishing the week having run all fifteen of the miles I said I would. This is the most milage I’ve done in a week since I finished the ‘thon; last week was the second highest at seven miles. My feet are definitely feeling it a little bit, but I’m feeling good and strong and I’m starting to really get excited for this up 10k.

I’ll be back after tomorrow’s Run Club sesh.